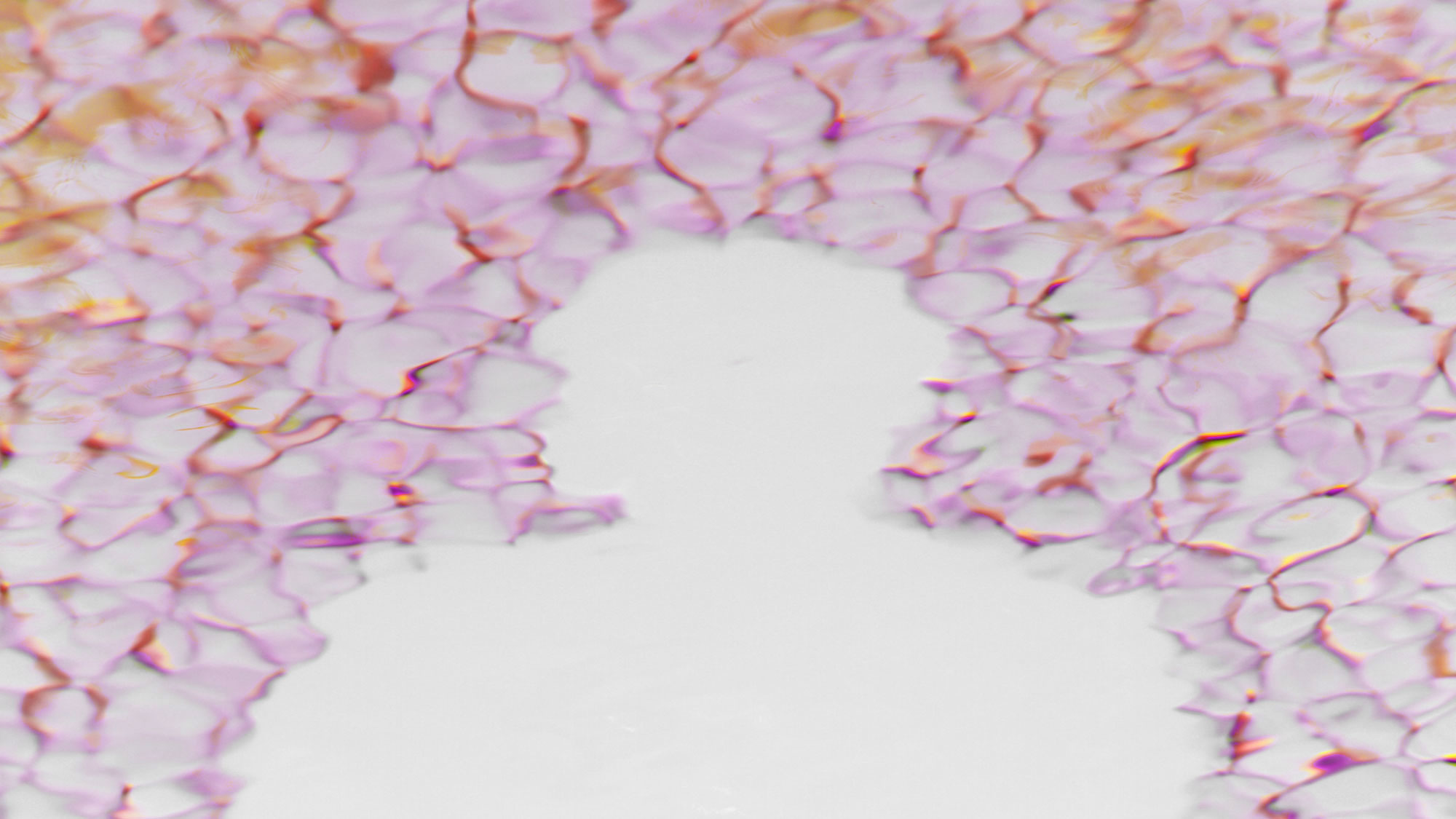 
A reverie of places infused with echoes of the artist's adolescence, Zucchini's new film Dreamwalker dives into trauma and latent desires. Zucchini orchestrates a universe of dense atmosphere, heavy bass and neon bodies, where interior and natural landscapes merge into one.

Zucchini's dream walk departs from the Camonica Valley and snakes on looping paths in and around his birth town, Brescia, at the foothills of the Alps in Northern Italy. The Camonica Valley was sculpted by a melting glacier during the last ice age, which left behind monolithic geological formations, known as the Zone Pyramids, and vast slabs of polished sedimentary rock. Over 10,000 years, from the Epipalaeolithic era to the early 20th century, the slabs were carved with over 300,000 engravings that now constitute a unique layering of anthropological time. Depictions of iron-smithing, labyrinths and roman inscriptions are superimposed over deer hunting and birth ritual scenes, all continuously reframing moments in time in relation to one another.

Dreamwalker suggests that this multi-temporal site makes palpable a cultural collective psyche that – rooted in the vibrant earth – carries within it an infinite array of shared histories, fantasies and anticipation. By weaving this ancient heritage into the familial settings of his youth, Zucchini articulates his own subjecthood as entwined with the collective, and his own growth and self-discovery through expectation, disappointment and loss as inextricably connected to the terrain of Brescia. As landscapes are perpetually shaped by colliding forces, so is the psyche, and their present states are continuously revising the past.

Evoking an experience of psychoanalysis, the film is narrated by two voices that guide Zucchini through a psycho-physiological deep dive. Composed as a slow, testing plunge through dream sequences that expose prevailing anxieties and lingering aches, the film portrays a body and a self undulating between states of impermeability and dissolution. Here the obscured and vulnerable human body, always in flux and charged with want, is extended with prostheses, defies fixed gender and adopts unfamiliar forms.

Zucchini conveys an intuitive response to the layers of geologic and cultural time embedded to his childhood home, the psychic resonances of which still animate his return to its landmarks. Dreamwalker is an artefact of archaeo-psychology – a descent into the strata of time and the psyche through an embodied relationship built with place. 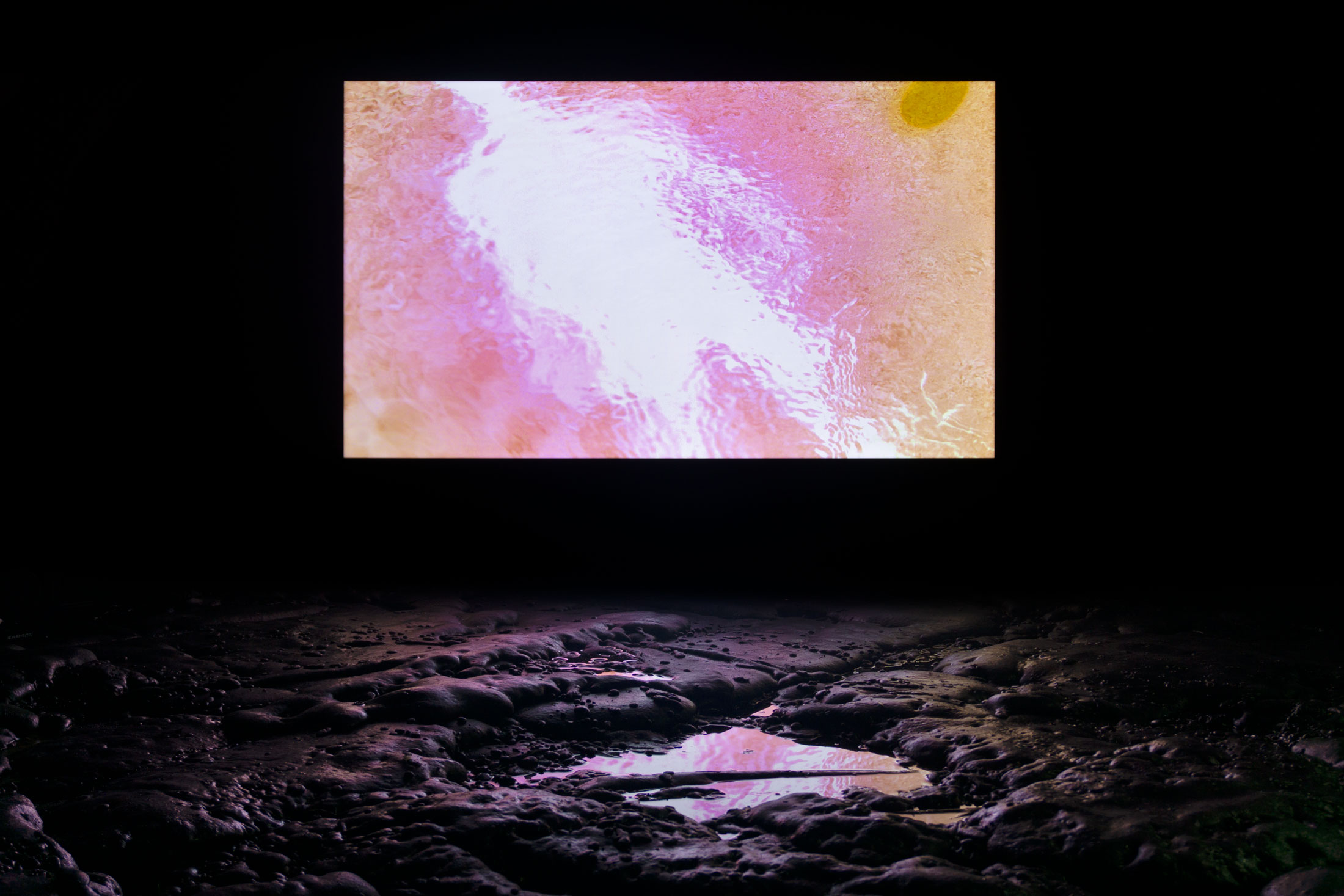 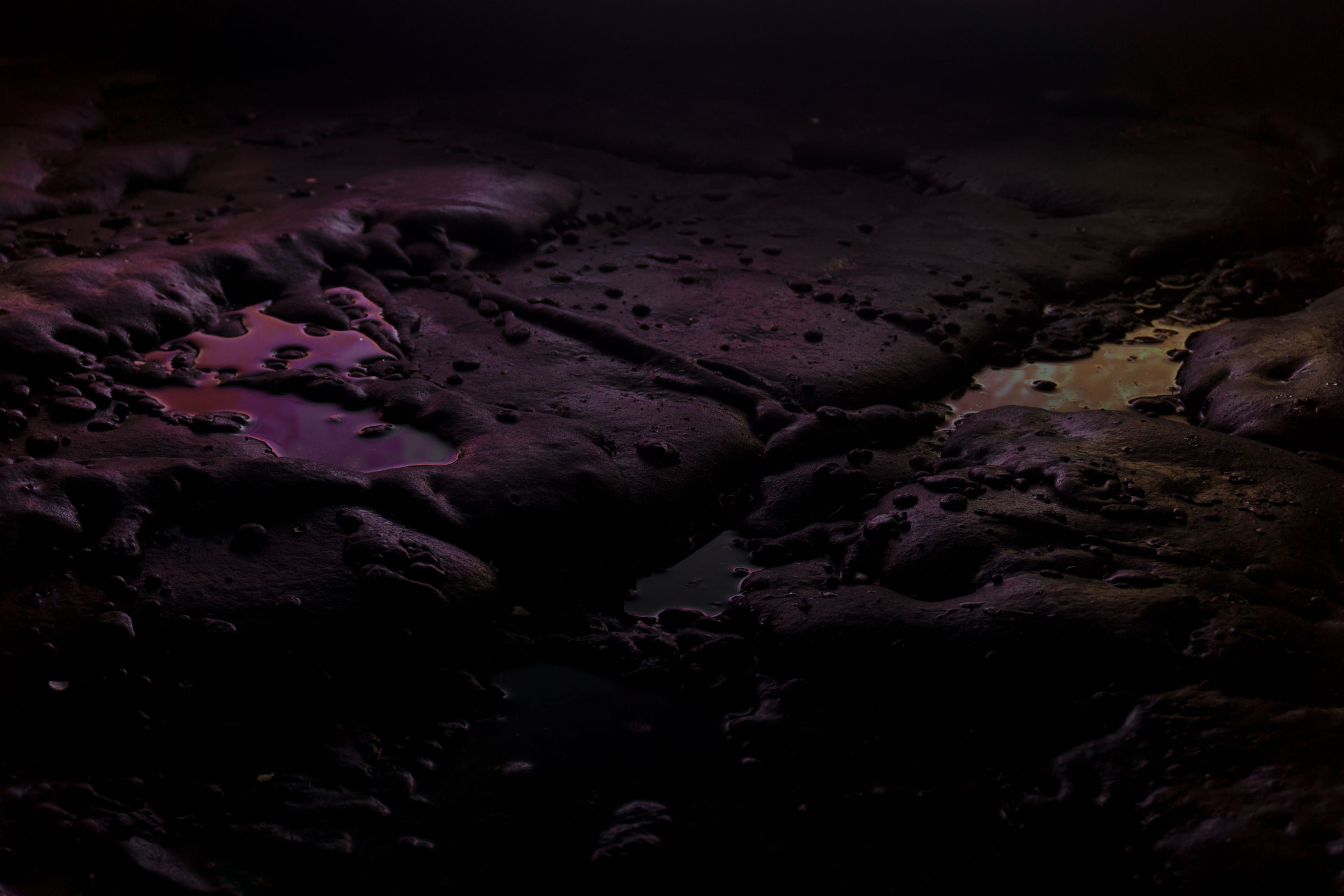 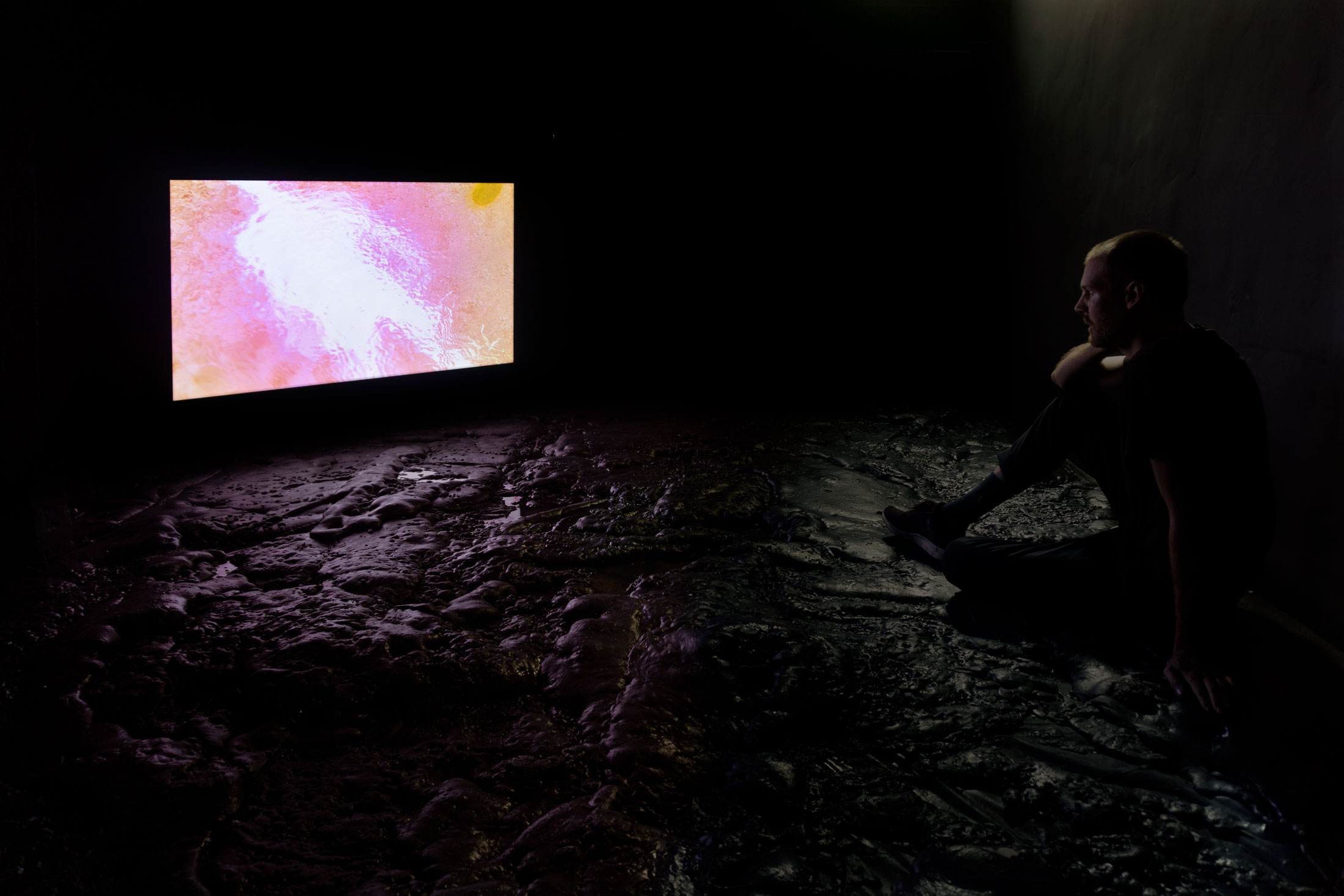 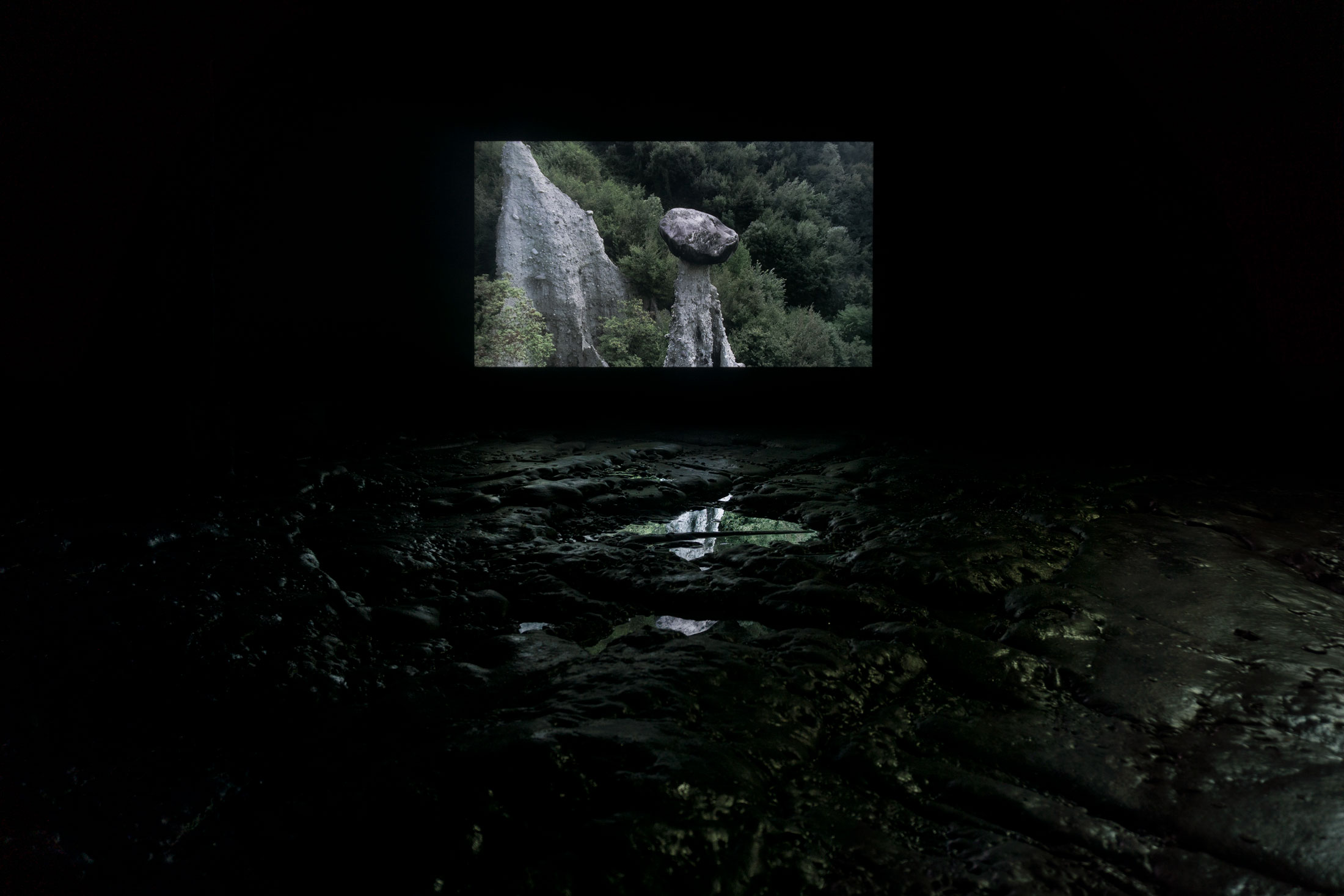 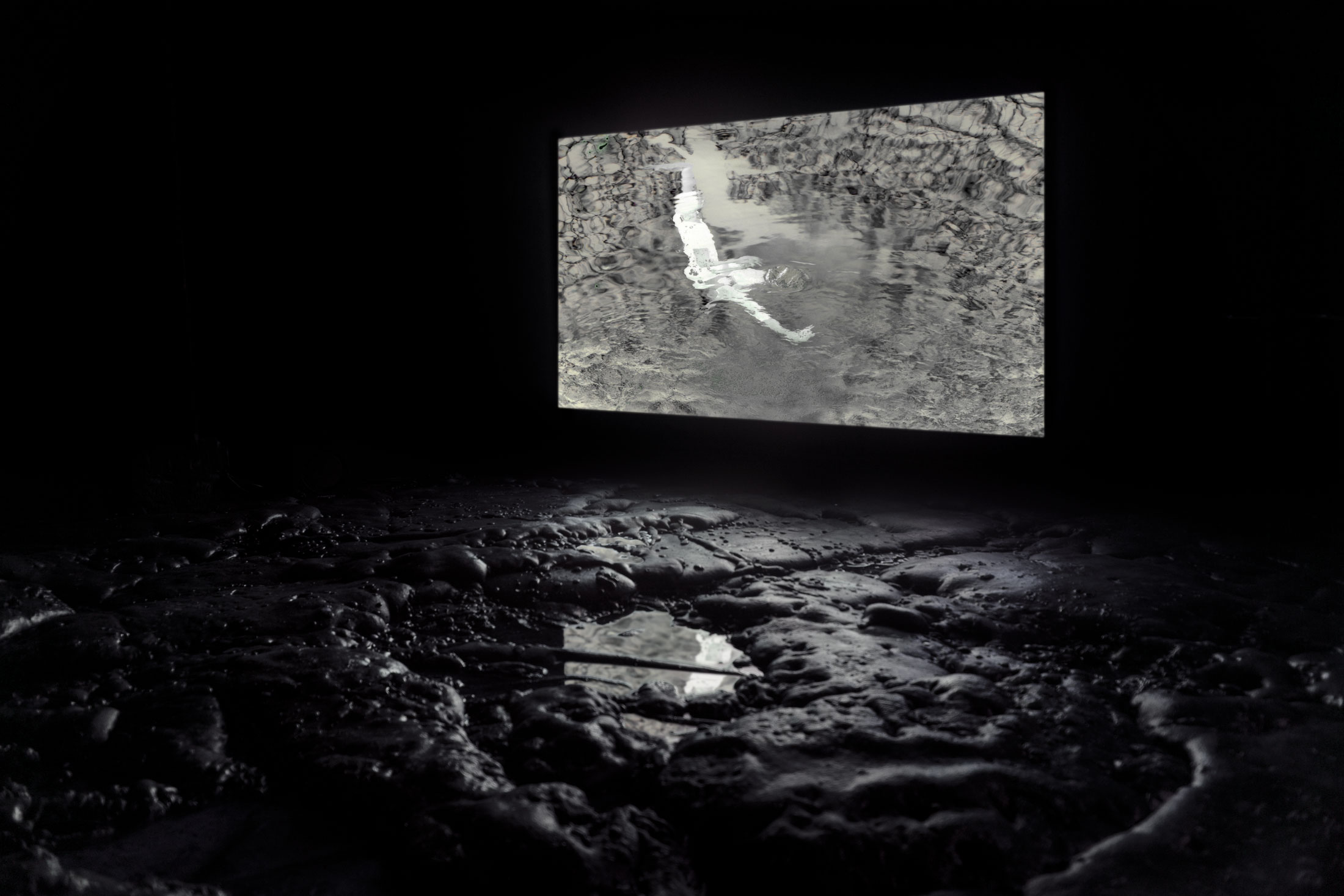 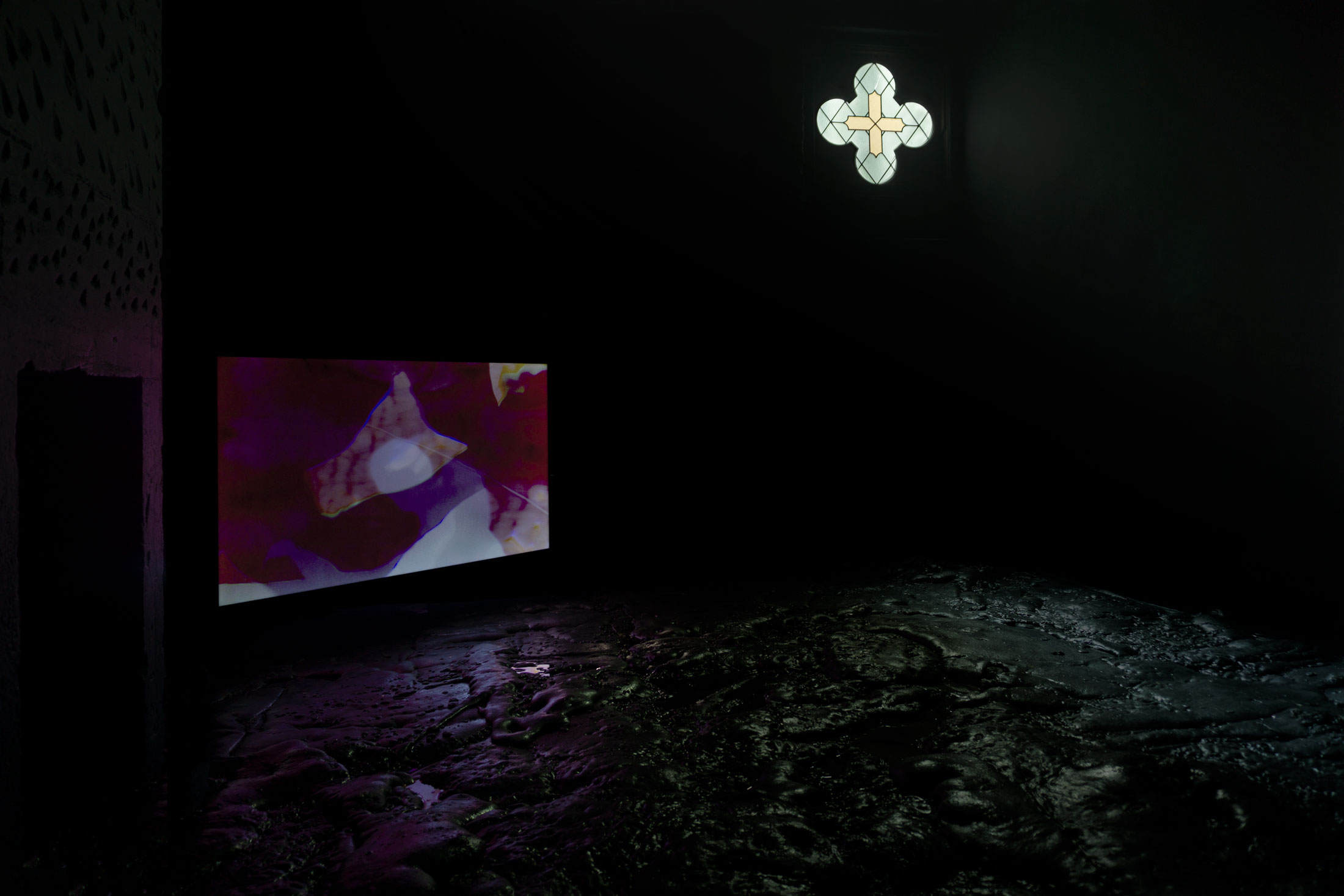 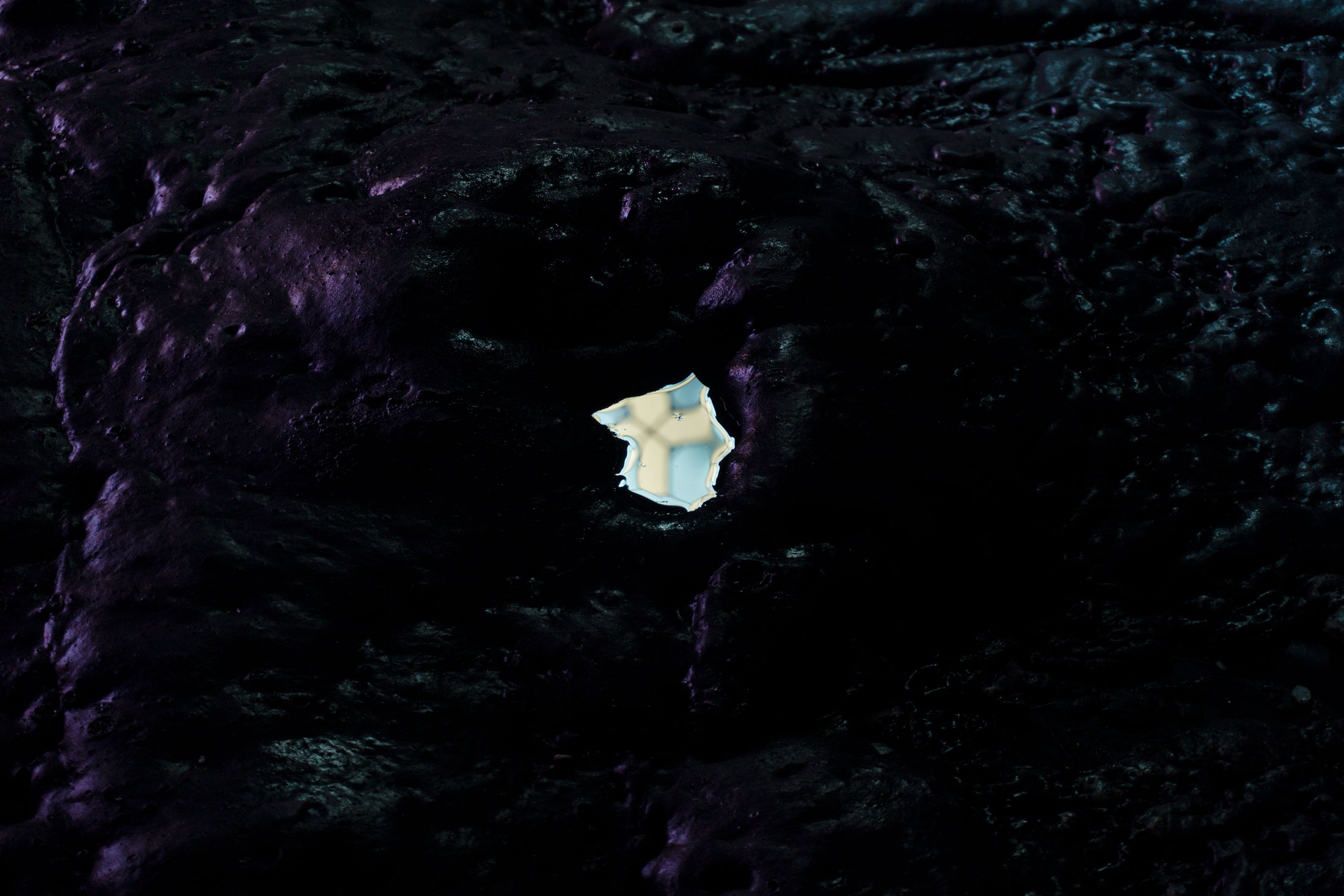 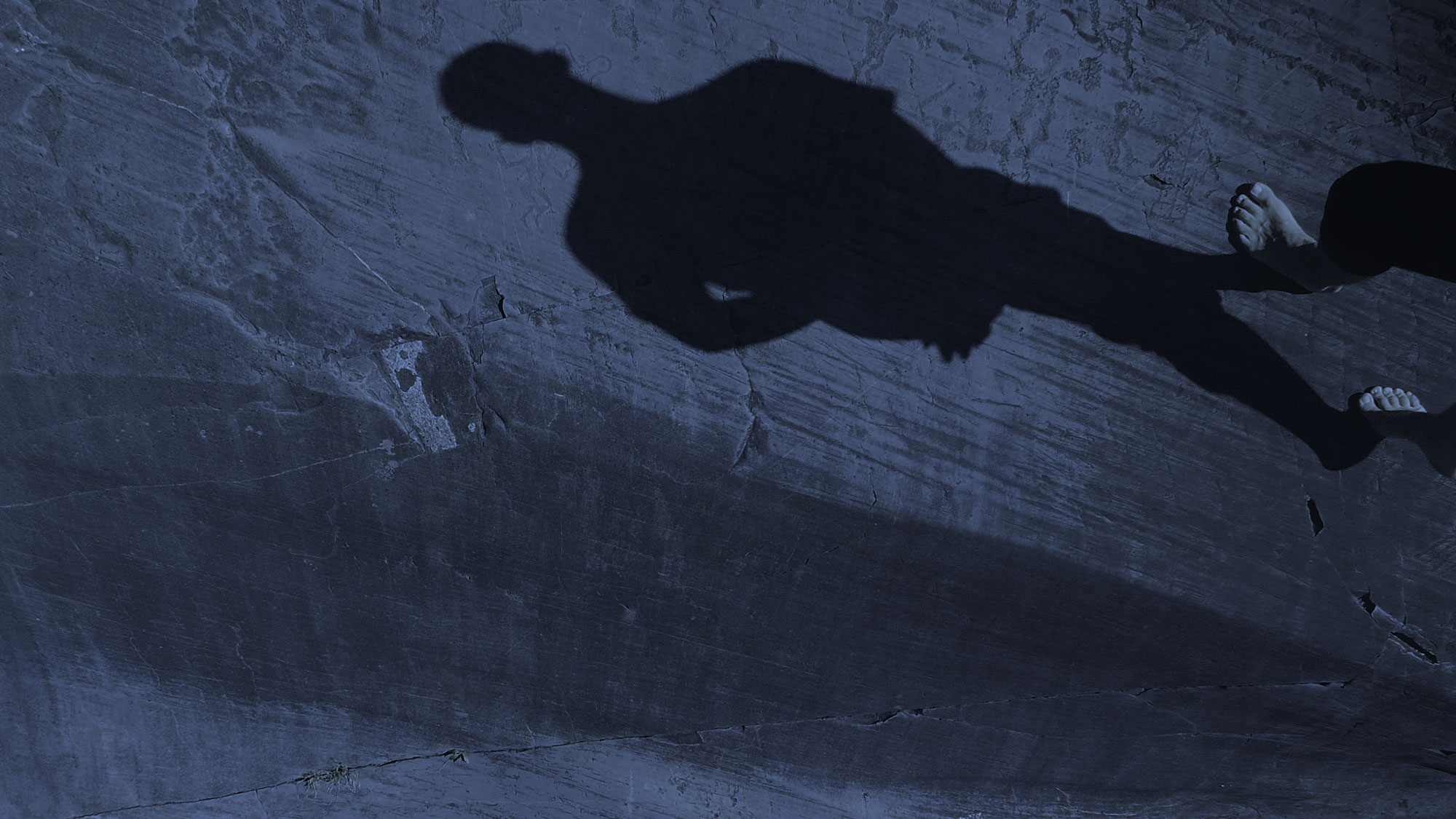 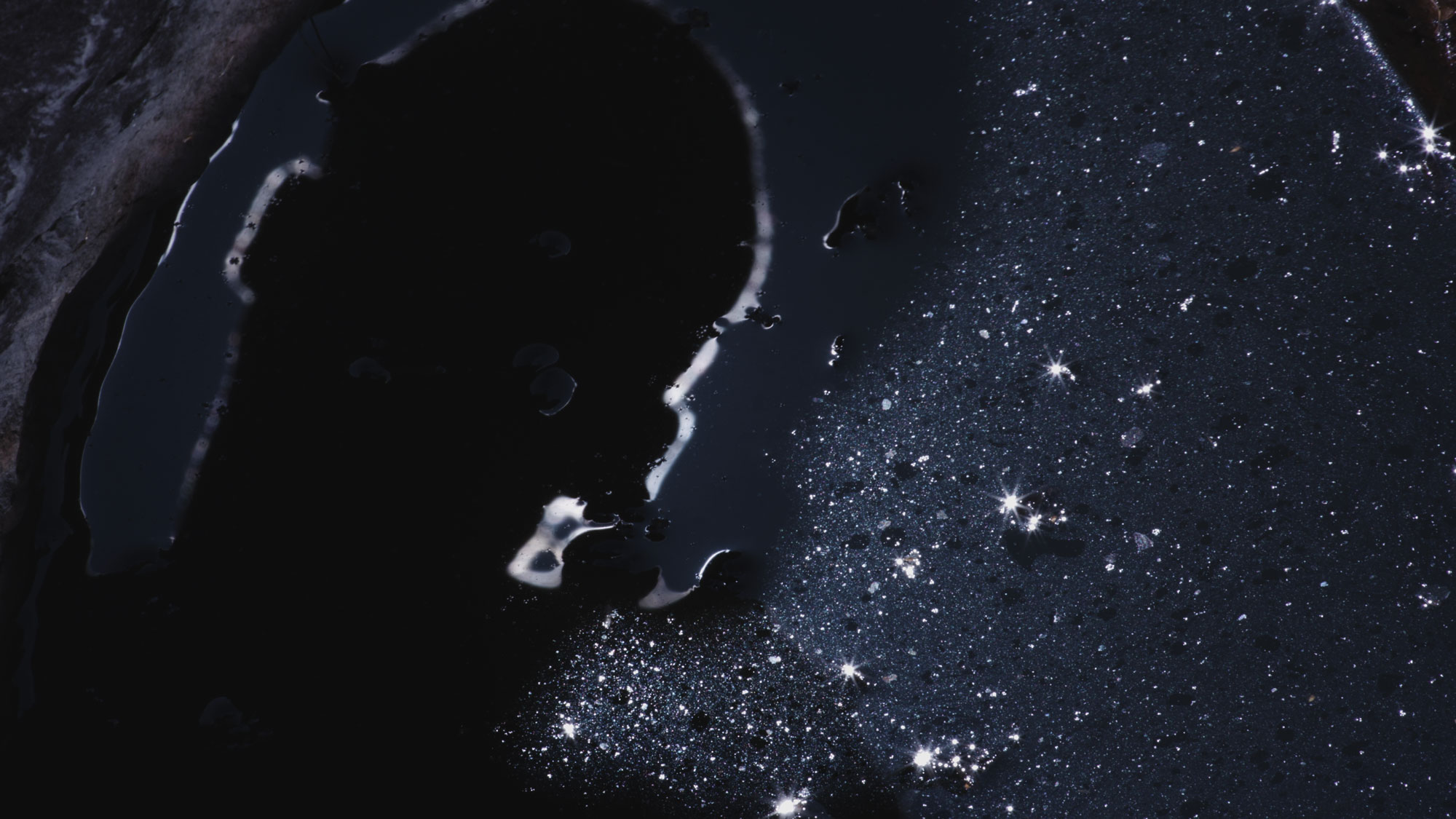 Andrea Zucchini, Dreamwalker, 2019, video still.
ANDREA ZUCCHINI
In his practice Andrea Zucchini explores the convergence of different fields of knowledge, juxtaposing the scientific to the mythological, and the geologic to the cosmological. The research and objects deriving from this approach tend to concentrate on the exploration of the various cultural histories and natural properties underlying materials.