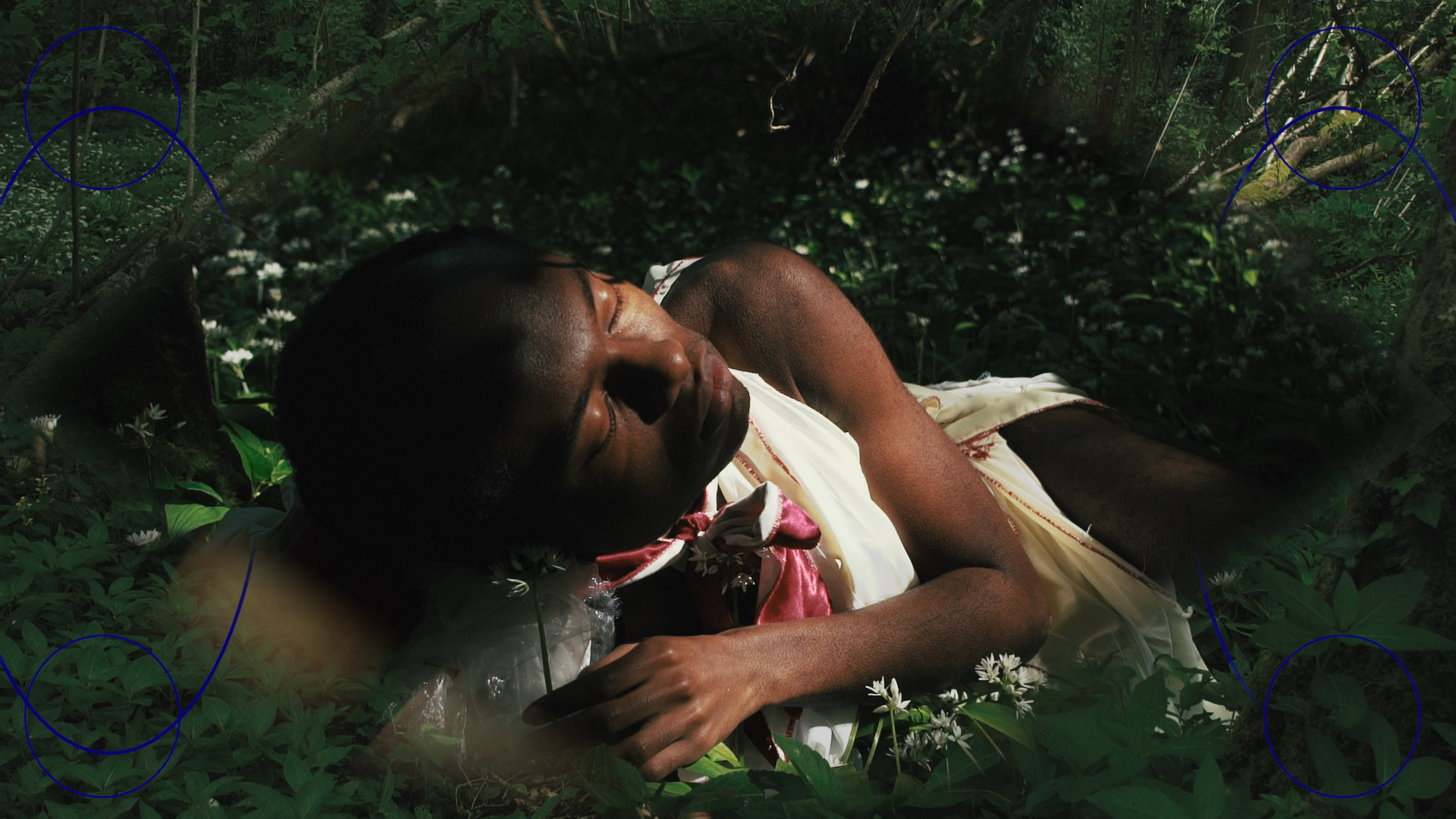 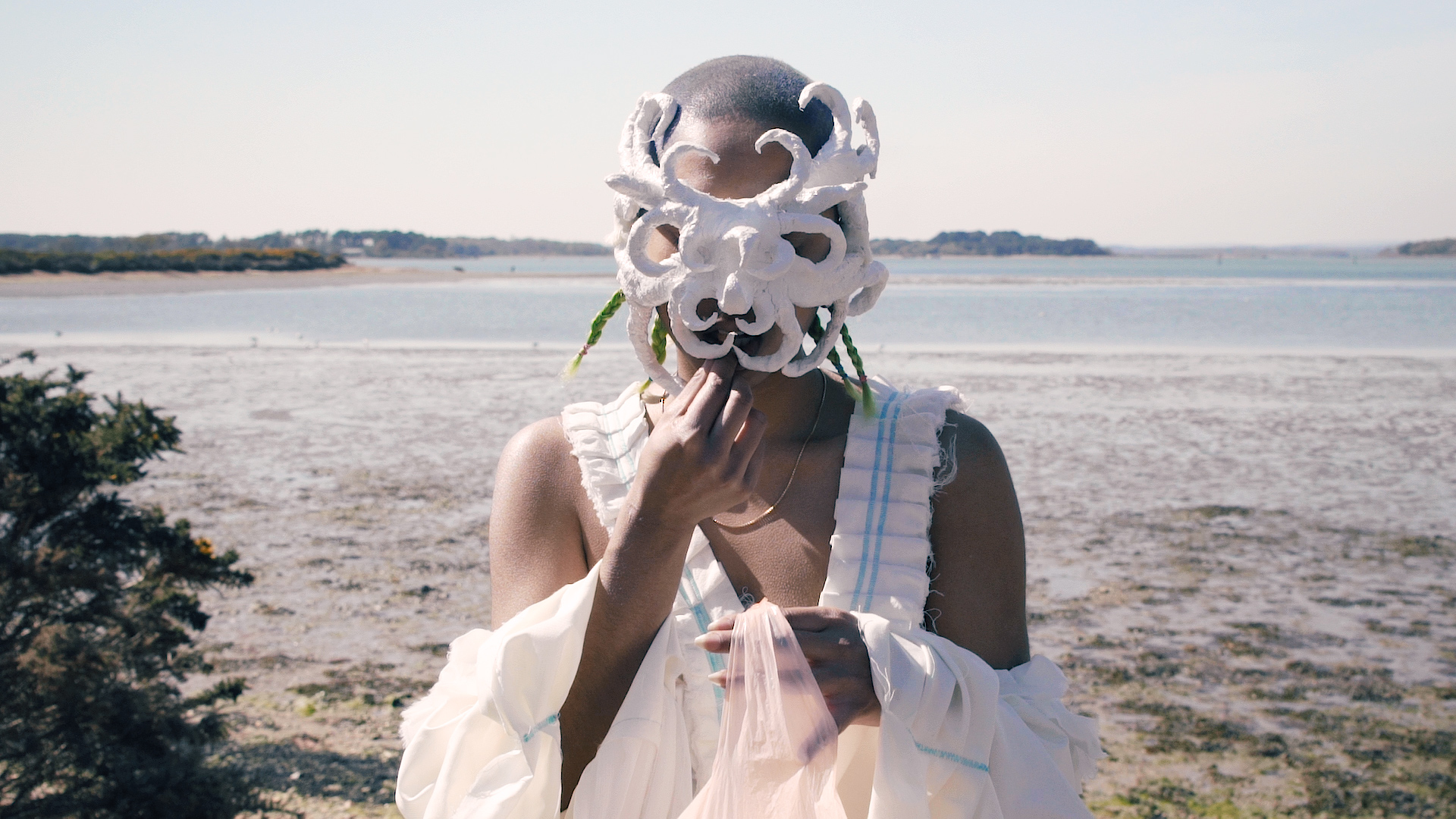 
(Tending) (to) (Ta) is a narrative-led speculative fiction film grounding itself in ‘tā’, the monosyllabic sound which in Mandarin Chinese encompasses all third person pronouns: 他 (third person male), 她 (third person female), and 它 (more-than-human lifeforms and objects). As these multiple genders and modes of being are all pronounced ‘tā’, the word ‘ta’ has in recent years been reconfigured and adopted as a gender neutral pronoun in colloquial contexts in Mainland China, in queer spaces and beyond. In the film, Lin casts ‘ta’ as an infinite cosmic entity with a proper noun Ta, who exists across universes and is present in all beings and matter.

The film follows an exchange of internal letters between two protagonists who imagine one another across parallel dimensions. Each communicating to an envisioned other, who exists as a possibility beyond their self-perceived boundaries of reality, these two beings meet in a shared world of imagination. In this reciprocal reach for the unknown, a world that bears an uncanny resemblance to our contemporary reality – colonised by Western capitalist constructs of race, gender and class, and characterised by a collective distance from Ta – opens a portal to another realm.

Here the potentialities of rethinking identity and the coexistence of life forms have long since been expanded. Subjecthood is recognised as fundamentally ever-changing, porous and codependent, and the accelerated rhythms of alienating wage labour are entirely absent. Daily routines stem from the interconnectedness of all beings, and encounters with the surrounding world are choreographed into affectionate, meditative rituals that not only honour these intricate bonds but also strengthen one’s affinity with Ta.

As the two protagonists confide in one another in search of connection and meaning, the boundaries between their two worlds become permeable. The film asks where the boundaries of our understanding and imagination are drawn, how to reach beyond them, and what unforeseen norms, restrictions or modes of governing might wait for us, if we were to leap across to the other side.

APRIL LIN 林森
April Lin 林森 (b. 1996, Stockholm — they/them) is an artist-filmmaker investigating image-making  as a site for the construction, sustenance, and dissemination of co-existent yet conflicting truths. They dream & explore & critique & fret & catastrophise & imagine & play with the potentials that the moving image holds — for a collective remembering of forgotten pasts, for a critical examining of normalised presents, and for a visualising of freer futures as, of course, imagined from the periphery.

April Lin 林森 uses video as a self-reflexive and cathartic tool, interweaving strands of auto-biography, world-building, documentary, performance, and the post-Internet, topped off with an inevitable garnish consisting of the other matters dialoguing with their brain and heart during the making process of each piece. Uniting their genre-fluid body of work is a commitment to centring oppressed knowledges, building an ethics of collaboration around reciprocal care, and exploring the linkages between history, memory, and interpersonal and structural trauma.

Song: The Arrow of the Deity of Love 愛神的箭 by Zhou Xuan 周璇

This film is dedicated to all of us who have had very Real Relationships with Imagined Selves, Imagined Others, and Imagined Worlds.

ACKNOWLEDGEMENTS
This film has been generously supported by Arts Council England and The Elephant Trust with in-kind support from Ugly Duck and Obsidian Coast.
4°